WELCOME TO THE AUVERGNE’S WILDERNESS

Welcome to the Auvergne’s Wilderness, into the Natural Park of the Auvergne Volcanos in Central France. Definitely a region to center and ground yourself in the energy of the Earth. North of it, Chaîne des Puys, a chain of 80 volcanoes dormant for over 8,000 years lately joined the Unesco World Heritage List while the Puy Mary, “Grand Site de France”, is worth another visit on a day excursion as the biggest volcanic mountain of Europe. Eroded these last thousands of years by the glaciers, the water and the wind, this mountain culminates at Plomb du Cantal, visible from « instants d’Absolu » (meaning timeless rare moments) Ecolodge & Spa which offers you the serene atmosphere of a luxury retreat on a legendary place… known first from the Romans, then Templars and pilgrims who would walk the Camino to Santiago de Compostela from Puy en Velay.

Picturesquely nestled in the heart of the deer-inhabited pine-forest of Pinatelle, overlooking Lac du Pêcher, it is an unspoilt paradise and the perfect spot for migrating bird-watching in season, while reestablishing those bio-links with the Earth and Sky, suitable to re-enchant the everyday life. Here is what Laurence COSTA & Daniel SIEGEL, creators of the ecolodge, rehabilitated this three-century-old farm for: a place of pure Wilderness Wellness. Horse-riding or dog-sledging as well as fishing on the lake offer occasions of being at one with Nature.

At an altitude of 3,760 feet, on a biodiversity hot spot labeled ENS (for Naturel Sensitive Space) protected as such (no swimming nor canoeing on the lake), here is a place where to surprise yourself while observing boreal species such as cranberry or the Nordic bat (called “noctule bicolore”) and enjoying stags and deers in the Massif de la Pinatelle as well as stoats, martens, foxes.
Several observatories for bird-watching and for the observation of the fauna (notably at the time of stag belling) are expecting your visit within the forest. In March, for a couple of years, otters have been observed in the lake. 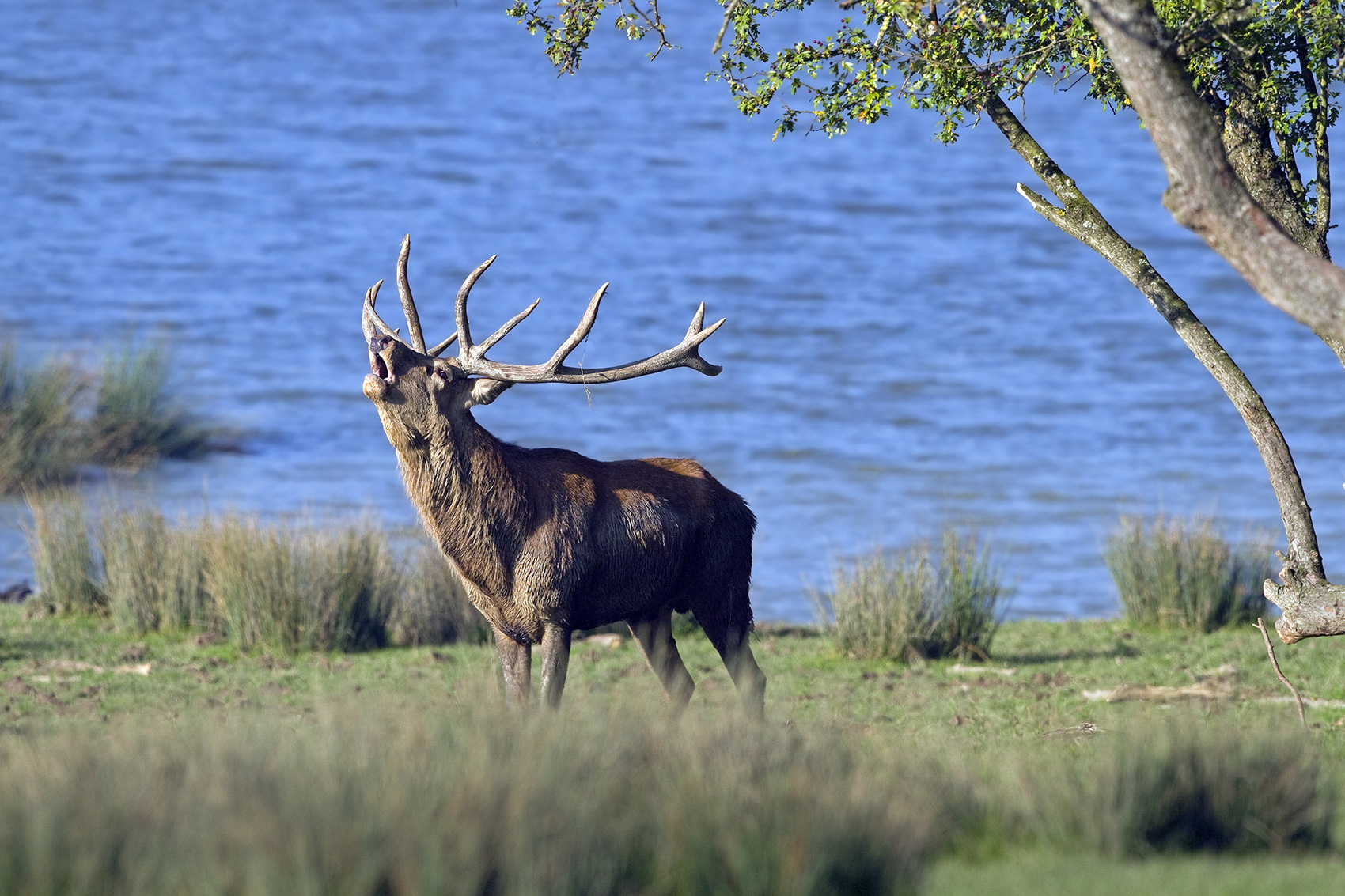 With a view to remaining humble in such a pure nature environment that should be the STAR, the creators of « instants d’Absolu » looked for simple though noble materials such as wood notably in the creation of a reception area with wood frame/wood fiber filling.

“As we do tell our guests, we didn’t want to kill the soul of this farm, hence the windows preserved in their original dimension, except to open here and there a double French window (especially in the living room as a place to rest and contemplate) in mirror to the French window of the barn entrance. With such information, the new reception area could surprise with its 4-meter-long-panoramic-window at the entrance. A window that opens onto a majestic panorama: the lake and the peaks of the ancient volcano. If we allowed ourselves to create such an opening, it is because in its length, it visually resumes the sequence of the four windows on the Spa side.”  explains Laurence COSTA who was in charge of the decoration. By optical illusion, the building does not present a stylistic break but allows to familiarize oneself with this remarkable natural environment before entering further.

As one can quickly understand, the ecolodge captures the essence of the wild landscape of Cézallier: the Safari like elegance of yesteryear combines with the contemporary local and humoristic touch of the stag woods and cow skin.

The whole decoration was thought of in the very flavor of long-distance Travel and after both functional and embellishment work in 2017, one can decode:
in the bedrooms: walls raised with raw materials such as brushed raffia or abaca bark, which are intended to express nature in its philosophical dimension. The 12 rooms are a hymn to laziness, an antidote to communication technologies, which are not allowed in (wifi is provided in the lounge only). Being together prevails in this ultimate refuge of luxury authenticity. Brown or cream leather wardrobe trunks, desks with crossed feet assert the flavor of Safari. 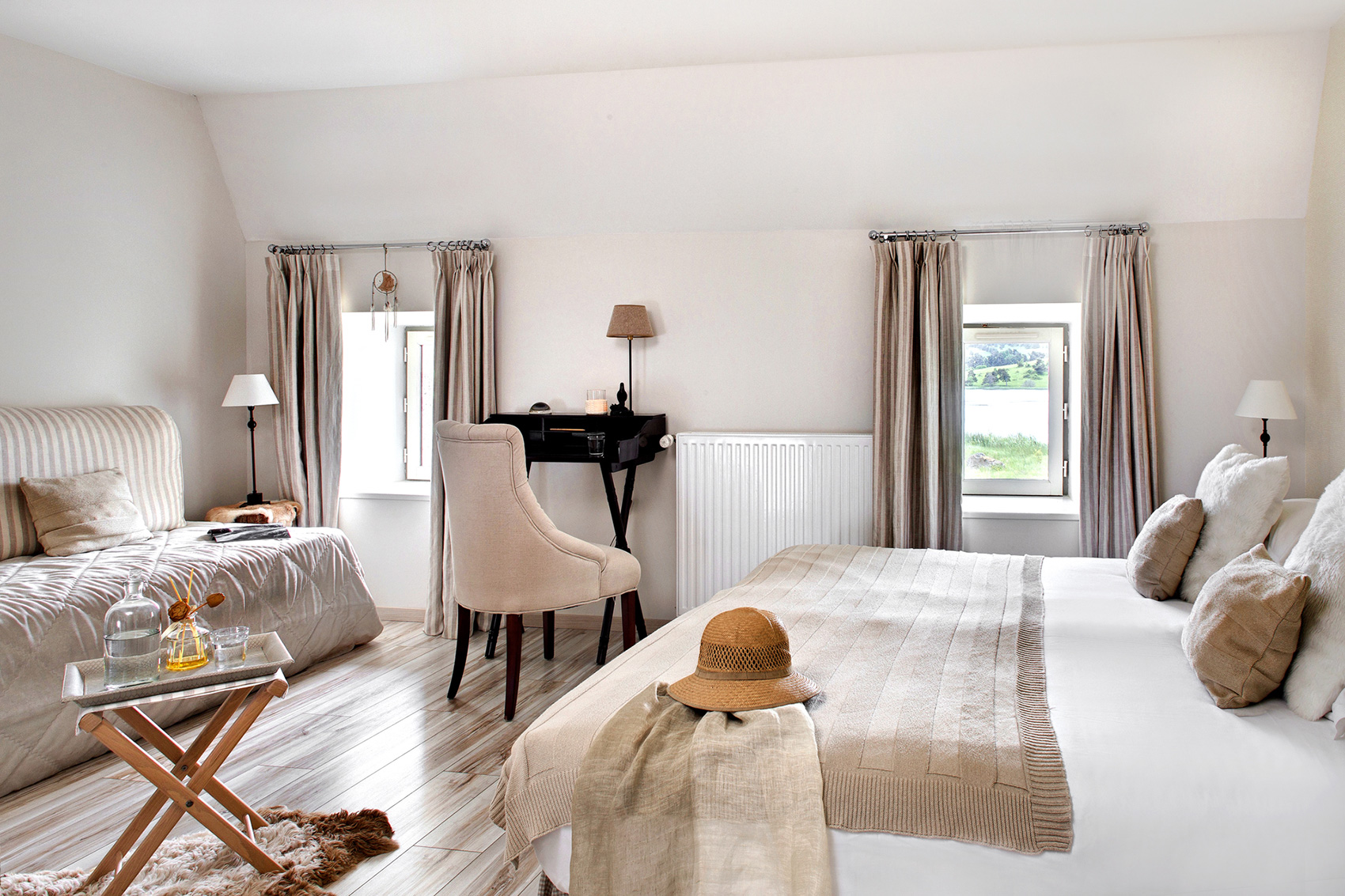 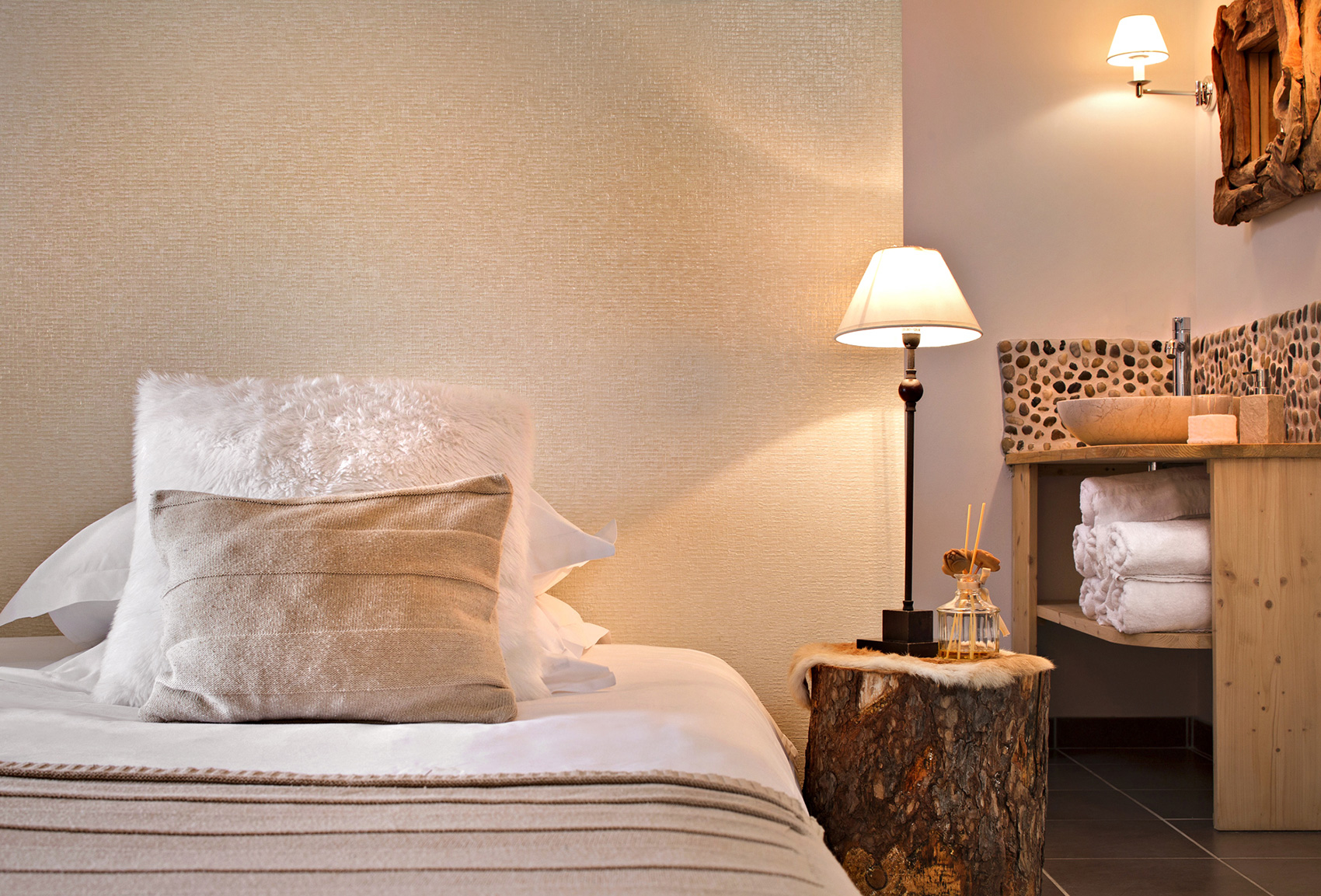 At the restaurant, spaces are delimited such as islets with a lounge area by the Cantou (majestic mountain fireplace), a restaurant area offering Lodge chairs by Virginie Lobrot, chandeliers made of deer antlers topped with feather lampshades… from pheasants or wild geese. Here is the very atmosphere of the place, always design as a tribute to Nature. 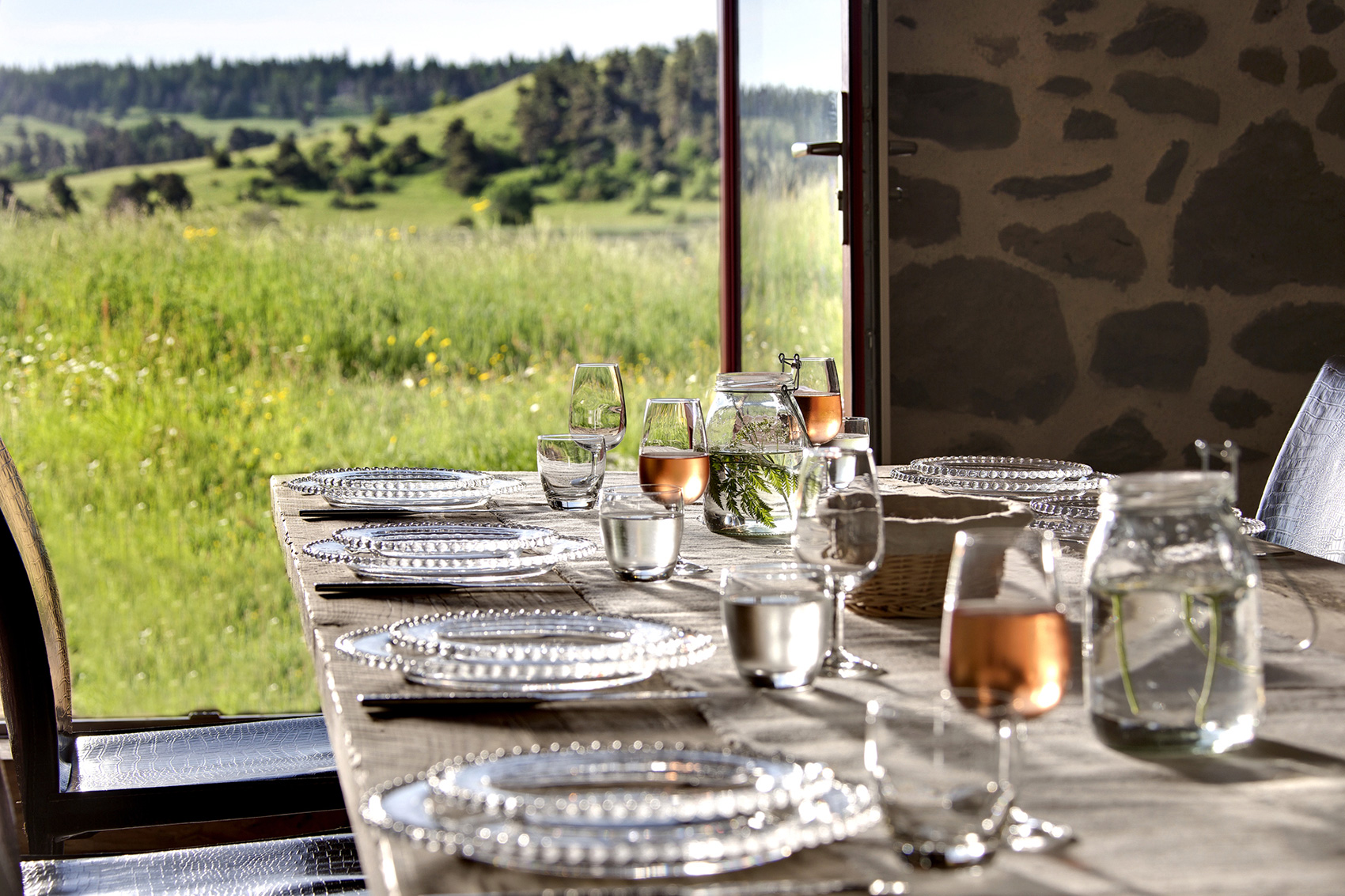 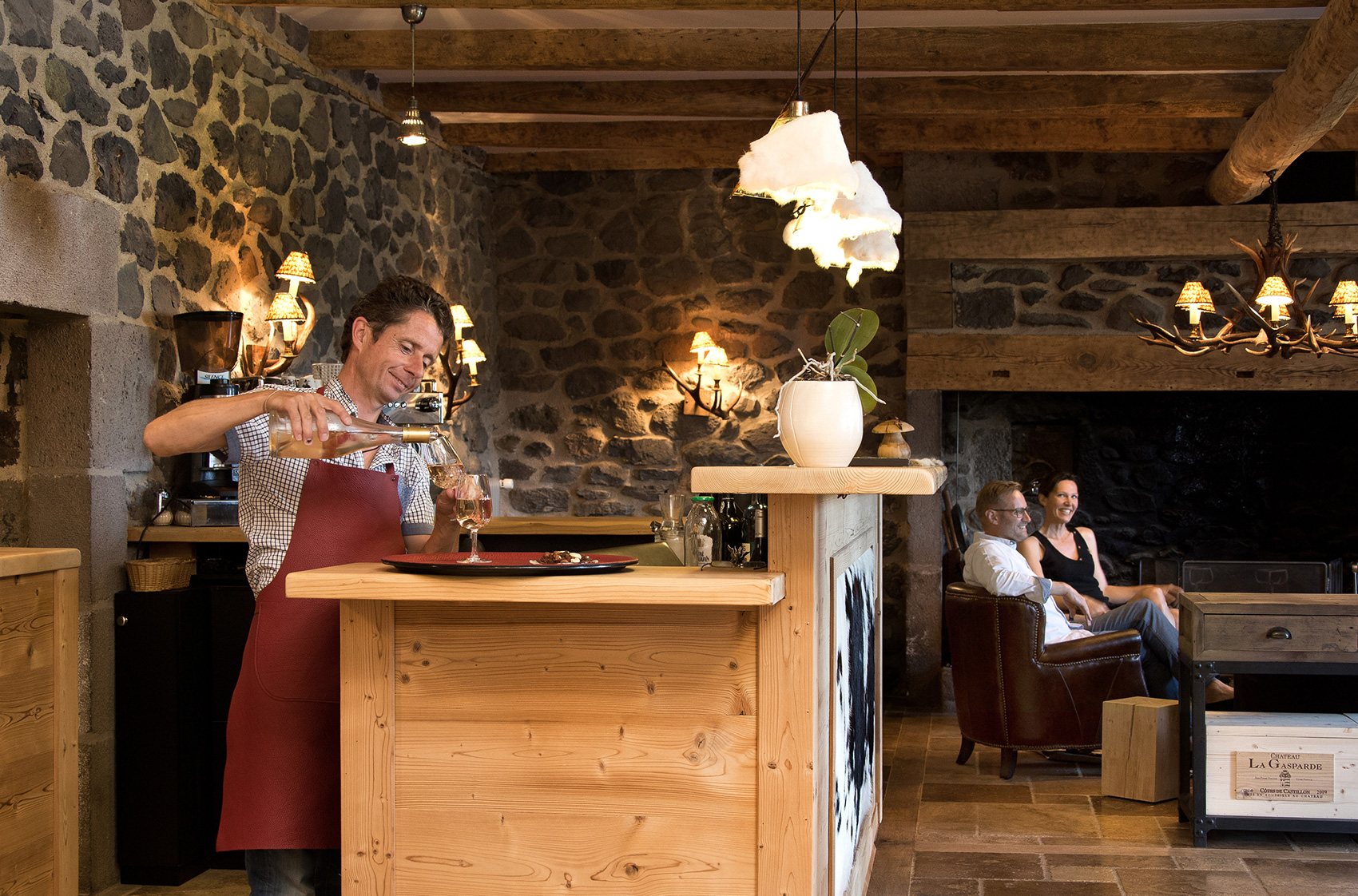 At the Spa, you are entering a real nature observatory with an outdoor hot pot by the lake, under a glass roof that can be either closed to let a shower pass or completely open ; a forest-oriented sauna and a steam bath cabin that offers a privileged view over the lake and the peaks of the volcano. In addition is a collective steam bathroom, granite grey, also dedicated to the clay wraps and scrubs of volcanic cosmetics at the time of the thala-source®, thalassotherapy-like beauty & rejuvenating care.

Armchairs and deckchairs made of kubu, braided vegetable fibres, lamp made of a compilation of pieces of wood also celebrate the naturalistic soul of the place. A real lifestyle in pure nature with an IN/OUTdoor philosophy. 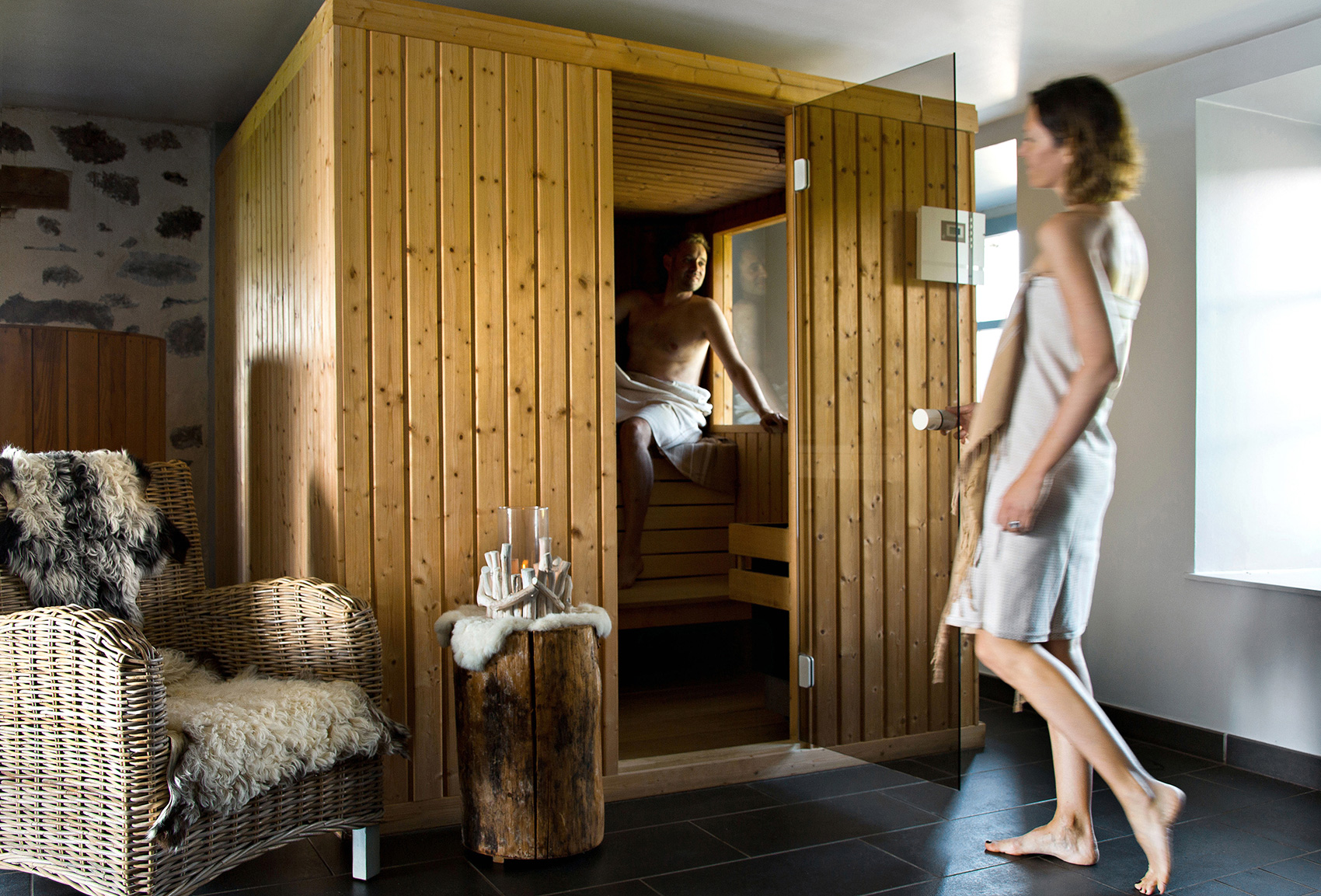 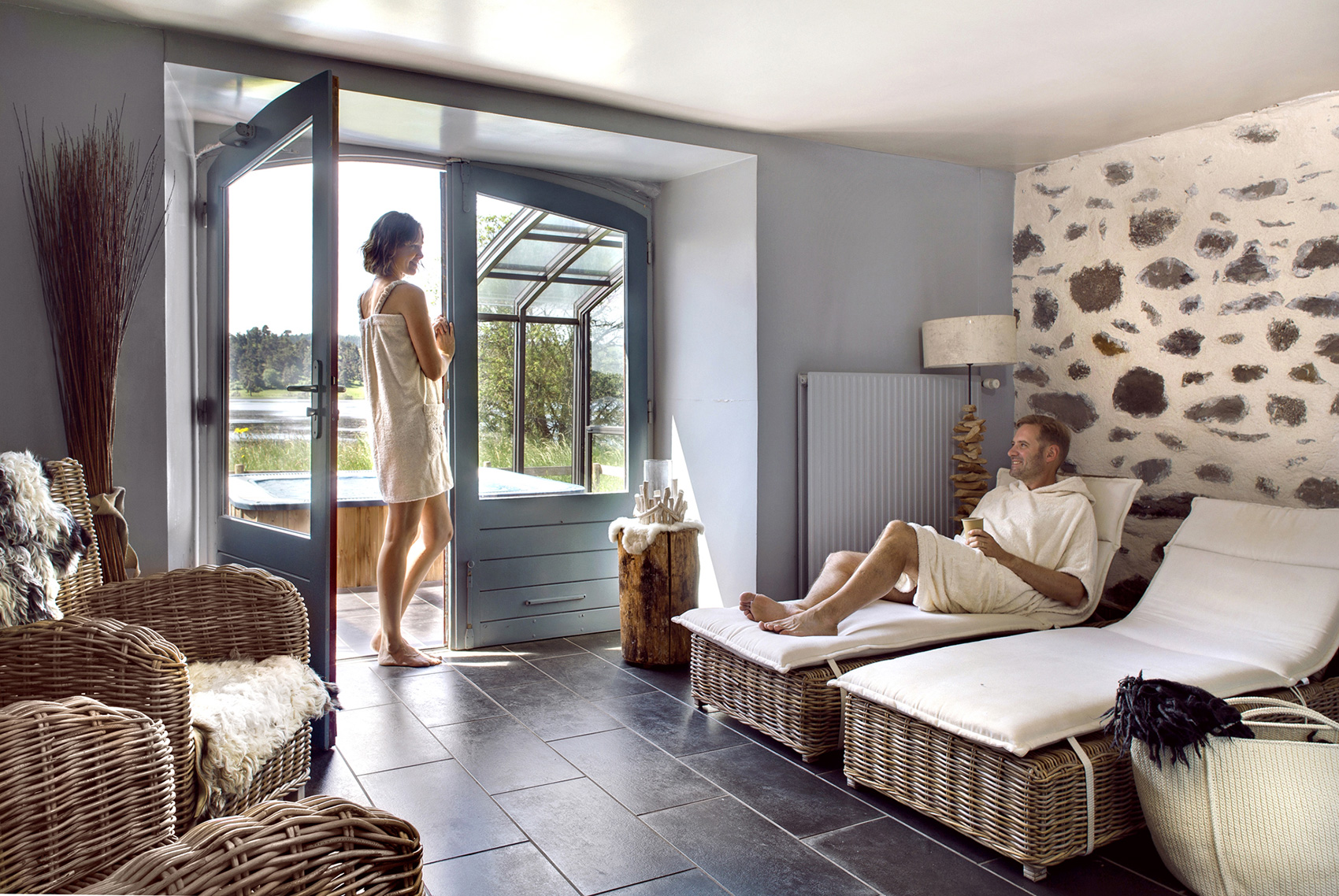 The Auvergne is known for its pounti and truffade, two mythical rustic dishes not to be missed during your trip and that for sure you will enjoy in any small inn or at a “buron” (old farm on a high plateau) renovated into a trendier restaurant. “Not at the ecolodge where the focus is on local products from the soil – for instance, blond lentil from volcanic soil – often conjugated with an exotic touch (such as for the Couscous with blond local peas and Argan oil brought back from Marocco). Here, we call the cuisine “gastro-nomadic” with a certain sense of humor while the restaurant tends to be a window onto Nature for refined dinners.” An exquisite selection of menus is prepared in harmony with the season and the ingredients come from farms and small producers based 30 kms away.

Apart from the classic restaurant, “instants d’Absolu” invite to other culinary experiences, such as the chalet-grill, a place where Daniel SIEGEL will take you for evenings up in the mountains and a grilled meat friendly moment in this small wooden chalet overlooking the Plomb du Cantal. At night, it becomes a mountain refuge with a view on the starry skies of Auvergne.

Another place, another moment to live: at the new table offering special evenings when to share a unique dinner and our dreams and recipes… for well-being, even more: Happiness. A White Paper dedicated to Happiness at “instants d’Absolu” Ecolodge & Spa can be downloaded free on the ecolodge’s website. 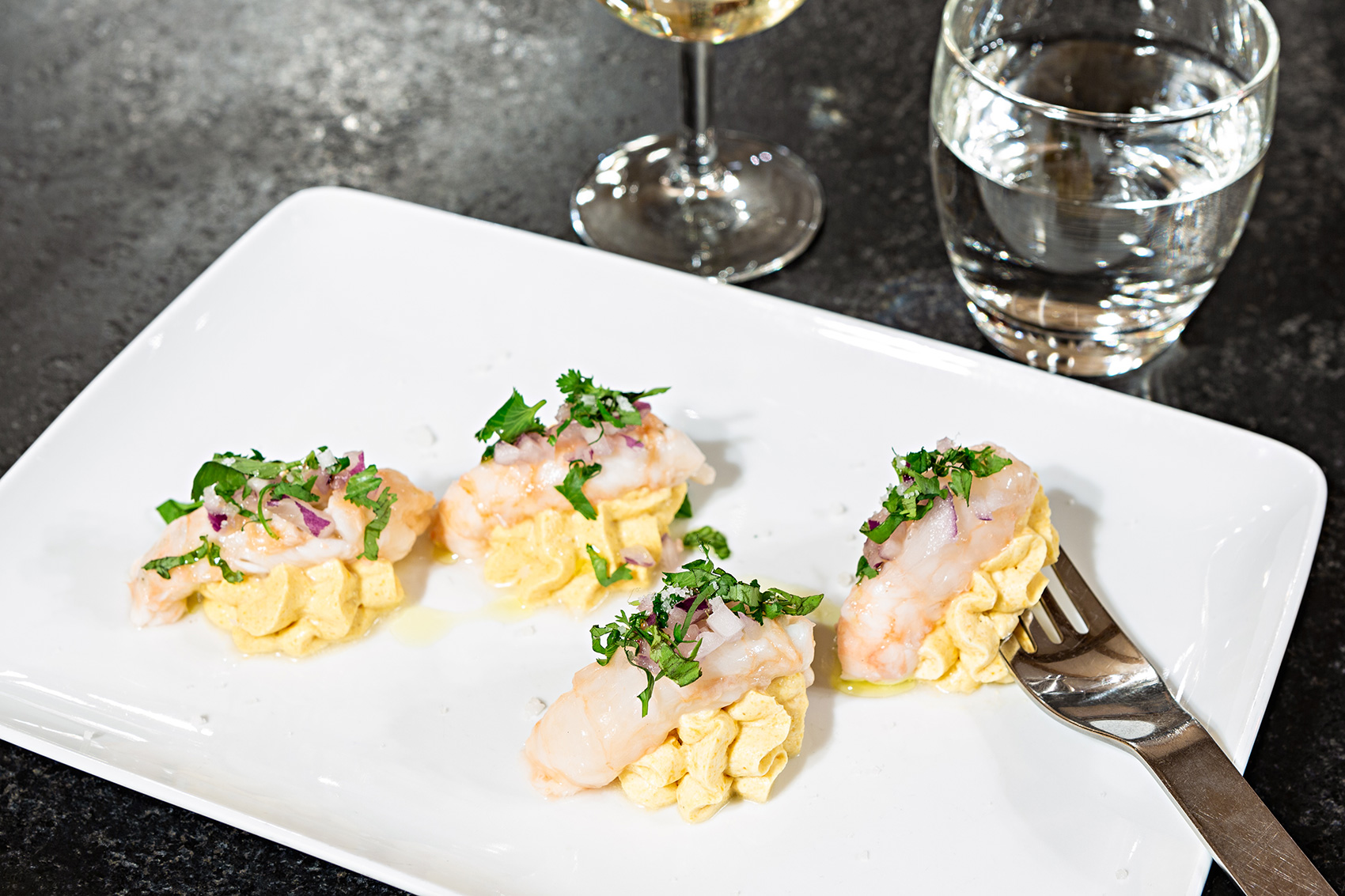 … the travel activity has been developed with a willing not to damage the environment, while encouraging energy savings and the sorting of waste (organized by the Hautes Terres). On the list notably:

Apart from possible Safari like excursions, notably at the time of stag belling but also dedicated to bird-watching, the traveler may expect to join guided excursions on botanics, geology and volcanism, constellations at night, as well as enjoy the harmonization path created by a geobiologist as an invitation to breathe and reconnect with the Earth & Sky and the 4 Elements: Earth, Water, Air, Fire. Specific vibratory loads have been fixed on the path for a deep cleansing and balancing of the subtle bodies as well as a clarification of the emotions and mind.

Yoga and meditation are other possible connections to the ecolodge ; the energy of the place and the wood terrace inviting to sit down and ground yourself.

on a ULM for a « once in a lifetime experience ». Look up to the sky and fly with wild geese for unique emotions to experience. On a two-seater ULM, with Christian Moullec who took part in the film « Migrating birds », allow yourself to rediscover the best of the nature… from the sky while taking part in an environmental project. 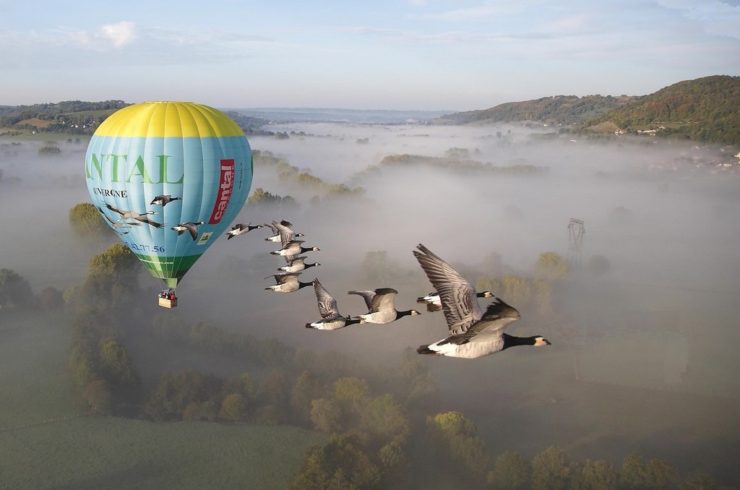